Blind Willie Johnson: His Life and Music by Jas Obrecht 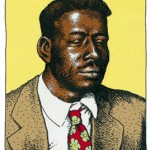 Blind Willie JohnsonÂ who was born on January 22nd, 1897 in Texas and died on September 18th, 1945 was a street musician, who played blues and sanctified – religious music. He is perhaps best known for his bottleneck guitar playing and vocalisations of humming and moaning on ‘Dark Was The Night, Cold Was The Ground’ recorded for Columbia Records in 1927 and later recorded by Ry Cooder for the soundtrack of ‘Paris, Texas’.

In October, 2011 the critic Jas Obrecht published a superb article on Johnson which can be found here and is well worth reading. It may encourage you to check out more of Johnson’s music.

This entry was posted in Blues, Gospel, Website. Bookmark the permalink.