Darren Revilla – Record Collector and Dealer: from the NJ Star-Ledger 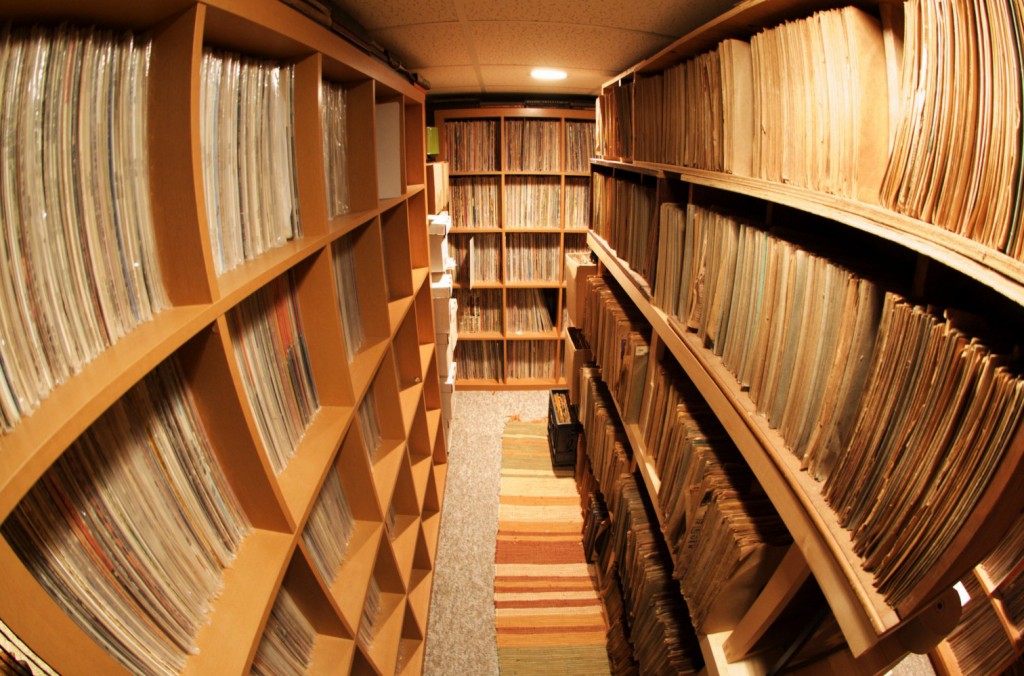 “So I was in some guy‚Äôs basement…” Darren Revilla‚Äôs stories start with this phrase so often that the Milltown, NJ resident could be mistaken for a plumber.¬†But it‚Äôs the music-lover-turned-entrepreneur‚Äôs never-ending quest for rare records and audio equipment that leads him on regular descents into the bowels of strangers‚Äô homes.¬†‚ÄúOne of the best parts of this whole thing is getting into people‚Äôs houses, seeing how they live and hearing the stories about the (record) collection and cool old stuff they have,‚ÄĚ said Revilla, 39.

‚ÄúThe things they think are garbage, I can take home, clean up and give new life to.‚ÄĚ

It was in one such basement ‚ÄĒ belonging to the widow of a like-minded vinyl fanatic with a 12,000-piece collection ‚ÄĒ where his online trading business, Revilla Grooves & Gear, came to fruition.

‚ÄúThe guy had everything alphabetized by label and in number order by the record themselves,‚ÄĚ said Revilla, with an audible reverence for the meticulously kept stacks of a friend‚Äôs deceased father.

After pulling out pristine copies of records by 1920s and ‚Äô30s blues and jazz greats ‚ÄĒ including Paramount Recording artists Charlie Patton, Blind Lemon Jefferson and Blind Blake ‚ÄĒ Revilla had an epiphany.

‚ÄúI went over and I made a deal with my friend and his mom. I said to him, ‚ÄėWhatever she wants, I‚Äôm in.‚Äô‚ÄČ‚ÄĚ

He dropped $10,000 on the massive collection ‚ÄĒ no chump change for the husband and father of two young children. But after decades spent collecting, spinning and, more recently, selling hard-to-find 78s and 45s, Revilla was confident the purchase would provide the inventory to turn his hobby into a full-time business.

The investment, made in the spring of 2010, began paying off immediately.

‚ÄúIt‚Äôs no exaggeration to say I made my money back in a month and a half,‚ÄĚ Revilla said about the music he sold from that collection ‚ÄĒ including a Robert (Tim) Wilkins‚Äô 78 from 1935 called ‚ÄúNew Stock Yard Blues‚ÄĚ that fetched $3,000.

A year and many eBay auctions later, Revilla, with the support of his wife Eileen Hudziak, decided to make another big investment in his budding business ‚ÄĒ his time. This September, he went from full to part-time hours as an IT and accounts receivable manager to focus on Revilla Grooves & Gear.

Having a husband who spends thousands on records and cuts back his hours at a stable job might not sit well with some wives. But Hudziak shares Revilla‚Äôs love of music.

‚ÄúThis didn‚Äôt happen overnight,‚ÄĚ said Hudziak, who works as a supply chain manager for Barnes & Noble in Monroe. ‚ÄúWhen we first met (in 1992), we went to his mom‚Äôs house and rifled through her 45s.‚ÄĚ Calling Revilla ‚Äúone of the most fiscally responsible people I know,‚ÄĚ Hudziak said she trusts her husband‚Äôs business decisions.

Since then, Revilla‚Äôs launched the website revillagroovesandgear.com and maintains a blog, Twitter and Facebook accounts to promote weekly online auctions. The irony that he‚Äôs utilizing new technology to sell a defunct one isn‚Äôt lost on Revilla.

‚ÄúThe first records at the turn-of-the-century must have blown people away,‚ÄĚ he said. ‚ÄúHere I am taking those records and selling them nearly 100 years later all over the world because of the internet ‚ÄĒ a technology that‚Äôs only been in wide use for 15 years.‚ÄĚ

When Revilla isn‚Äôt selling, he‚Äôs buying ‚ÄĒ on average 400 items a week ‚ÄĒ and always scouting for the next big score in ‚Äúsome guy‚Äôs basement.‚ÄĚ But it takes more than time and money to keep a music-trading business afloat. Extensive musical knowledge is a must ‚ÄĒ including knowing what collectors want now.

‚ÄúI know a Paul Anka record isn‚Äôt going to be worth a damn ‚ÄĒ no offense to Paul Anka ‚ÄĒ Perry Como, too. That music is not hot right now, hasn‚Äôt been since then,‚ÄĚ Revilla said. ‚ÄúBlues will always sell. The 1920s and ‚Äô30s always sell.‚ÄĚ

The vast musical library housed in Revilla‚Äôs mind was stocked during his days as a disk jockey, a job he stumbled into shortly after graduating from Rutgers University in 1994 with a Bachelor of Arts in Journalism and Mass Media.

‚ÄúAmong my friends I became ‚Äėthe dude with the records‚Äô‚ÄČ‚ÄĚ he said of his time on the New Brunswick campus. ‚ÄúIf you needed records, you needed music, you just called, and I could bring down three crates.‚ÄĚ

So in 1995, when a buddy started tending bar at a dive called Just Brumfus in the basement of the former Brunswick Arms Hotel, he invited Revilla and his milk crates

That gig led to house parties, a stint at the Plumb Street Pub, and later, more lucrative gigs around New Brunswick, and clubs in New York and Philadelphia.

More gigs meant Revilla needed more records. In 1997, he got a job at the Princeton Record Exchange.

‚ÄúI was living a teenage dream at 25 years old,‚ÄĚ he said. ‚ÄúBuy the records with DJ-ing money. Go spin them later and make more money and spend it on records.‚ÄĚ

Working at one of the country‚Äôs largest independent music stores fortified not only Revilla‚Äôs record collection but also his list of business contacts, among them, Princeton Record Exchange owner Barry Weisfield.

Since Weisfeld‚Äôs store buys and sells CDs, DVDs and LPs, any leads Weisfeld receives on collections of 78s or 45s, he passes on to Revilla. Dealing in 78s, which stopped being pressed in the mid-to-late 1950s, requires a lot of hustle, said Weisfeld.

‚ÄúIt‚Äôs extremely specialized, what Darren has done. He‚Äôs spent a lot of time learning about 78s that are in demand. The people who want 78s are few and spread out,‚ÄĚ he explained. ‚ÄúTo sell something online is very time-consuming. It requires a lot of know how. You can‚Äôt just list a lot of things. You have to list the right titles. You have to obtain the right titles… My point is, if it were that easy, we‚Äôd be doing it.‚ÄĚ

By the time he and Hudziak moved into their home in 2001, Revilla had amassed 7,000 records. He‚Äôd also become a new father and his interest in hanging out at clubs until the wee hours was waning.That‚Äôs when a producer friend offered to take 50 to 100 of Revilla‚Äôs 45s, 78s and LPs on a trip to Japan, where he knew a buyer.

Leaving a secure, full-time job to jump-start your dream requires a leap of faith. And in a market that‚Äôs devouring new businesses every day, is Revilla‚Äôs risk paying off?

‚ÄúIn this economy, what I‚Äôve found is some people are kind of looking to get money any way they can. So selling those 50 records sitting in their closet that they don‚Äôt have any use for is going to help them buy groceries,‚ÄĚ said Revilla about picking the right time to beef up his collection, which now hovers somewhere around 20,000 records.

‚ÄúI‚Äôm smack in the middle, which is the perfect place to be, between the person who needs to sell stuff and the rich guy who‚Äôs willing to spend crazy money for something they don‚Äôt really need.‚ÄĚ