In The Footsteps Of John A. Lomax 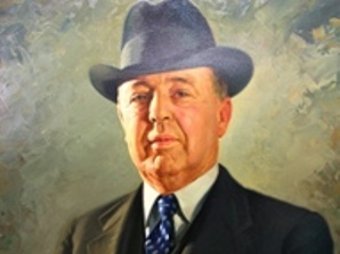 One hundred years ago, a Texan named John A. Lomax published a collection of songs which introduced Americans to a musical patrimony that would influence popular song for decades to come.Â

â€˜Cowboy Songs and Other Frontier Balladsâ€™ was the product of years of collecting by Lomax who early in the 20th century searched far-flung ranches, and dusty back alleys of Western towns in search of songs that were born on the frontier.Â Living in a time when you can tune in and share music from all over the world with the click of a mouseâ€¦itâ€™s difficult to appreciate the importance of Lomaxâ€™s work.Â In his day, songs were local.

They varied from town to town, and people in the big cities never heard the songs sung along the backr oads and byways.Â American classics such as ‘Home on the Range’, ‘Git Along Little Dogies’, and later,Â ‘Goodnight Irene’ and ‘Midnight Specialâ€™ were unknown until John A. Lomax collected and published them for the rest of America to enjoy.

He was the first folklorist to pay attention to songs that chronicled the American experience; other folklorists of his time focused almost exclusively on the great European epics and folksongs.

The publication ofÂ â€˜Cowboy Songsâ€™Â in 1910 was a landmark in the history of Americaâ€™s interest in its own folk culture, and it made Lomax a national figure. In addition to cowboy songs, Lomax had a lifelong fascination with African American folk songs, particularly the blues.

These two passions drove Lomax to what many consider his greatest achievement, the collection of more than 10,000 recordings for theÂ Archive of American Folk SongÂ at the Library of Congress.
Steve Zeitlin, City Lore

This radio broadcast from ABC in Australia narrated by folklorist Hal Cannon, retraces those back roads of Texas and Louisiana to discover why the folk music that John A. Lomax documented in the early 20th century still resonates with us today.

Cannon follows Lomaxâ€™s path, listening to the original recordings he made, visiting some of the places where Lomax recorded, and talking with the grandchildren of those he recorded.Â With the help of cultural observers, folklorists and historians, Cannon demonstrates how the simple act of acknowledging the lives and music of ordinary working people changed history.

From the Fort Worth Stockyards in Texas to Angola Prison in Louisiana this is a musical journey to the roots of popular music worldwide.

This entry was posted in 78rpm, Americana, Country/Hillbilly, Roots. Bookmark the permalink.