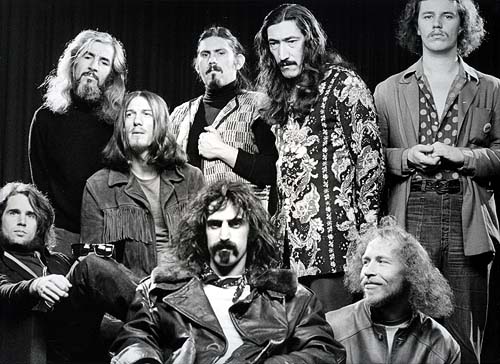 The original Mothers Of Invention - Motorhead third from the left.

As many Zappa/Mothers of Invention fans will no doubt be aware, former Mother Euclid James ‘Motorhead’ Sherwood, died on December 25th aged 69.

Born in Arkansas City, Kansas, on May 8th, 1942. Motorhead first met head Mother Frank Â Zappa in 1956 Â at Antelope Valley High School in California. Sherwood was in the same class as Frank’s brother Bobby. Zappa and Motorhead had a fondness for blues and R&B. Zappa, at the time fronting a band called The Blackouts and heÂ would regularly jam with Zappa.

When the Mothers Â signed a recording contract with MGM Records in 1965 and cut their debut album ‘Freak Out’ Motorhead Â was not a member of the band but described his role as “making sound effects on some of the songs”.

After the album’s release in June 1966 on Verve, the band won Â a six-month residency at the Garrick Theatre in New York, playing 14 shows a week. Sherwood was a roadie and and lighting operator but on the Mothers first visit to the UKÂ he joined the band as a musician. Band member Ray Collins gave Sherwood the nickname ‘Motorhead’, because Sherwood was always working on cars and motorcycles.

This version of the Mothers appeared on the BBC show ‘Colour Me Pop’ and the clip below includes Motorhead on baritone sax.

With the Mothers Sherwood played baritone and tenor sax, percussion and sang on ‘Absolutely Free’, ‘We’re Only In It For The Money’, ‘Cruising With Ruben & The Jets’ and on Frank’s solo album ‘Lumpy Gravy’.

He also appeared in 1971 film ‘ 200 Motels’ with Zappa and played on the 1973 album ‘For Real!’ by Ruben & the Jets a band led by Ruben Guevara. he is also present ‘You Are What You Is’ from 1981, on tracks appearing on Zappa’s ‘Lather’ box set opus and on Zappa’s synclaviar album ‘Civilization Phaze III’ issued in in 1993, the year of Frank’s death.

He is also to be found on reissues and countless bootleg albums of the pre 1969 Mothers.

Motorhead also played in the spin-off band The Grandmothers, and played on a couple of albums with them as well as playing with former Mother Don Preston and the band Ant Bee.

This entry was posted in Rock. Bookmark the permalink.