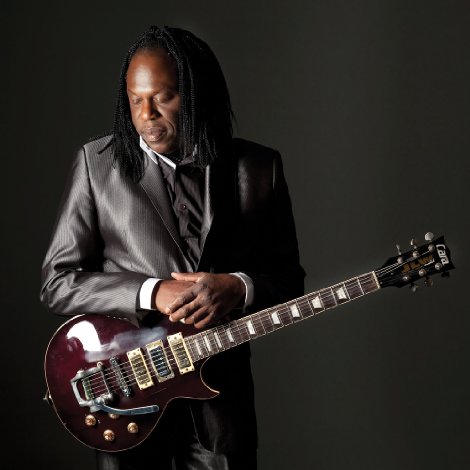 Joe Louis Walker has issued twenty three albums over the past twenty five years. he first came to the attention of blues fans in the UK when Ace Records leased and issued Joe’s Hightone album ‘Cold Is The Night’ in 1986. His first appearances in the UK were electric! Not only had we discovered a brand new blues talent who could write new songs, but also here was a guy who could play stunning slide guitar and lap steel! And he had a great band – The Bosstalkers featuring Bay Area bass player and songwriter Henry Oden.

I well remember on of his early shows at the Half Moon at Putney in London when he tore the place apart. Other great shows followed – one show at a packed the Band On the Wall, Manchester stands out – an I still have a cassette tape of the show.

Another memorable occasion was an invite to a small London recording studio where Joe was working with Otis Grand. Joe had produced Otis’ debut album ‘Always Hot’ . Otis had laid down the tracks for a forthcoing album and were doing mixes and it was fantastic watching them work together. Otis and Joe had been long time buddies and went onto record the recently reissued ‘Guitar Brothers’ on JSP.

There are few CD albums by Joe that I don’t have (alongside ¬Ýcassettes and vinyl) – my favourites included his ‘Live At Slim’s’ releases.

January 31st see’s the release of Joe’s debut album for Bruce Iglauer’s Alligator outlet. Called ‘Hellfire’ my preview copy has not been ¬Ýoff the deck since it arrived.

Joe is also joined by The Jordanaires on a gospel number ‘Soldier For Jesus’ – Joe had played in gospel groups before his debut with Hightone. The set is being promoted as ‘blues-rock’, with Alligator aiming at a new audience.

Now the term ‘blues-rock’ turns off many die-hard blues fans – but as one of that fraternity ‘Hellfire’ will do for me! Watch this one get nominated for all sorts of blues awards in 2012.

This entry was posted in Blues, Compact Disc, DVD. Bookmark the permalink.