New Set From Rory Gallagher Due May 31st. 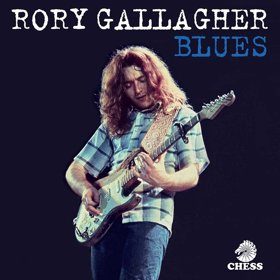 In what would have been the 50th year of Rory Gallagher’sÂ recording career, UMC have announced the release of ‘BLUES’ on 31st May. From the vaults of the GallagherÂ estate’s tape archive comes this collection of rare and unreleased recordings of Rory playing blues material, ranging from never heard before tracks to special guest sessions and lost radio sessions, from 1971 right through to 1994.

Renowned for his blistering live performances and respected for his dedication to his craft, Rory died in 1995, aged just 47, yet his reputation has continued to flourish in the years since.

From his first album with Taste through his final solo album, Rory remained true to his own musical vision.

Like the American bluesmen he admired, he created an instantly identifiable sound.

Rory was influenced by many blues artists including Buddy Guy, B. B. King, Blind Boy Fuller, Big Bill Broozny, Muddy Waters and Lead Belly. But unlike many of his peers in the U.K., especially during the 1960s and 1970s,Â Rpry did not specialise in note-perfect copies of other artists songs.

As he explained to an interviewer in 1978, “I never started out to be a strict recreator of the blues or even a modern young bluesman. I wanted to be me.”