The NAMM Show (National Association of Music Merchants)Â was held in Anaheim, California recently. This is an annual event which features part equipment and accessories exhibition, part new-product unveiling, part deal-making frenzy between manufacturers and retailers, and possibly the most cacophonous musical assemblage on the planet. A Guitar Geek’s heaven.

The bulk of NAMM events are held in private – strictly passes only – but some are open to the public, including one of the liveliest and most colorful is roots-guitar greatÂ Deke Dickersonâ€™s Guitar Geek Festival. 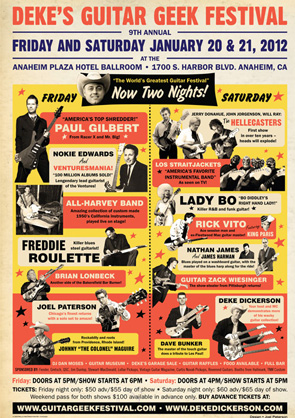 This year he brought Nokie Edwards back to celebrate his surf-guitar style and a reunion of the Hellecasters (a supergroup of guitaristsâ€™ guitarists with John Jorgenson, Jerry Donahue and Will Ray), Paul Gilbert, Los Straitjackets, blues steel guitarist Freddie Roulette and Lady Bo, who played alongside Bo Diddley.

There was also a country rock gig with the original lineup of the Desert Rose Band (the 1980s and 1990s group formed by ex-Byrd and Burrito Brother Chris Hillman and Herb Pedersen).

Guitar hero Steve Vai was awarded the Les Paul AwardÂ for Technical and Creative Achievement – TEC Awards. A clip of Steve performing at the ticket only show is featured above.

This entry was posted in Rock, Rock & Roll, Roots, Uncategorized. Bookmark the permalink.