The link between Lenin and Captain Beefheart

“The following tone is a reference tone…..” So began Captain Beefheart’s 1967 debut album ‘Safe As Milk’ – and into ‘Yellow Brick Road’ and the use in the intro of an obscure electronic musical instrument – the Theremin invented by ninety years ago by a young Bolshevik scientist and inventor, Leon Theremin.

The instrument, was also used on ‘Electricity’ (listen above) and ‘Autumn’s Child’ on the same album. It was also later to be used, not just by the good Captain, but also the Beach Boys on ‘Good Vibrations’ and later Pink Floyd, was supported and promoted by Lenin. Here was musical instrument that could be played without it being touched. Theremin was was summoned to meet Lenin – who was impressed.

The instrument consisted of a small wooden cabinet containing glass tube oscillators and two antennae – one sticking out the side and the other out of the top – which produced electromagnetic fields.

Theremin played Lenin classical pieces and then guided Lenin’s hands in playing the instrument himself. Impressed? Lenin was andĀ he sent Theremin on a promo tour across Russia. (No T-Shirts and freebies back then alas). 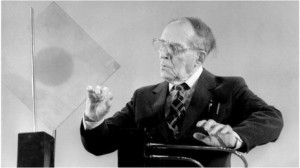 He performed at Carnegie Hall. His instrument also attracted the attention of the Radio Corporation of America, RCA, who offered him what was then the huge sum of $100,000 to manufacture it.

A contract was signed on 12th March 1929, making RCA the first mass producer of an electronic instrument.Ā RCA saw the Theremin as a replacement for a home piano.Ā The Theremin went on sale in September 1929 costing $220. Just one month later came the Wall Street Crash.Ā RCA halted production.

Theremin stayed in the US for a while working on other projects, and engaging in industrial espionage as he hadĀ access to firms like RCA, GE and Westinghouse.Ā He also ran his own companies, which were fronts for industrial espionage – he also developed a drum machine – so he’s to blame? Ā He returned to a Soviet Union, leaving his ballet dancer wife in the USA . He was arrested during one of Stalin’s purges and falsely accused of being a counter-revolutionary, for which he received an eight year sentence in 1939.

Theremin worked on bugging devises during the war and was released in 1947 but returned to work for the state security system as a free man, then worked at the Moscow Conservatory where he worked on, and taught his instrument.