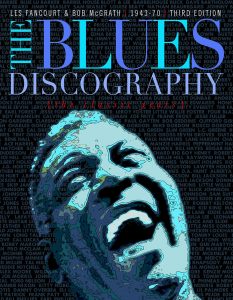 The history of ‚ÄėThe Blues Discography‚Äô can be traced back to the mid 1960s when Mike Leadbitter (of Blues Unlimited) and Neil Slaven (of R&B Monthly) came together to work on ‚ÄėBlues Records 1943-1966‚Äô, a ‚Äėselective discography‚Äô of 380 pages eventually published in 1968.

Subsequently, an expanded ‚ÄėBlues Records 1943-1970 (A-K)‚Äô by Leadbitter and Slaven was published by Record Information Services in 1987 and a second volume (L-Z) was published in 1994 by RIS, credited to Leadbitter, Les Fancourt and RIS. In 2006 Eyeball Productions published the award winning ‚ÄėThe Blues Discography‚Äô and a second, limited edition appeared in 2012.

¬†The third edition which features over 1300 artists will be published with a slightly changed format in order to reduce postal costs. It will be over 775 pages ‚Äď (it would have been over 850 pages if the previous format had been used and much more expensive to mail according to Eyeball‚Äôs Bob McGrath).

The third edition has a new cover design, historical introduction by Blues & Rhythm‚Äôs Tony Burke, plus full acknowledgements of those who have contributed information over the years.

Date of release is 1st February, at a cost oto be announced and it will be available exclusively from¬†www.eyeballproductions.com¬†

4 Responses to UPDATED:: 3rd Edition Of ‘The Blues Discography’