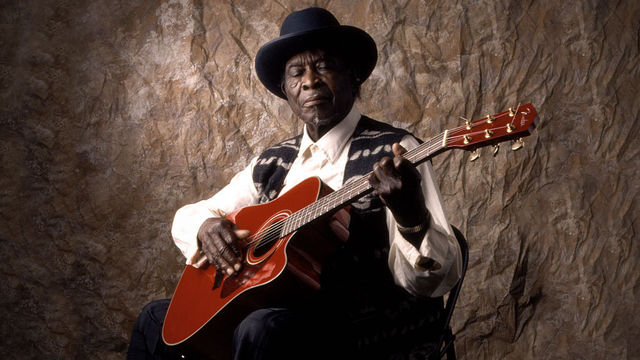 Radio 2 broadcast a celebration of the life Â bluesman David ‘Honeyboy’ Edwards, on August 28th. Honeyboy died a year ago.

According to the BBC blurb: “American based music journalist and broadcaster Gianluca Tramontana conjures the wild and tangled forests, the broad, unhasting river flows, somewhere ‘twixt Memphis and Tupelo’, to the heart and home of Honeyboy.

He knew the first blues musicians to be recorded, such as Charlie Patton, and travelled with the founding fathers of blues music including Robert Johnson.

Honeyboy was one of hundreds of thousands teenagers hopping freight trains during the Great Depression. He travelled in search of work – to play music, but his weakness for gambling, wine and women often got him into trouble.

After the war he settled in Chicago where his reputation as the greatest country blues musician took hold.

Honeyboy’s death marks the end of an era, that lives in the hearts of music lovers around the world. His life story is mostly untold, but it’s a crucial slice of American history that has been in the shadows.

Tramontana hobos across the country – taking in Chicago, New York, Mississippi and the National Hobo Convention in Iowa – to understand the world and ways of a different type of American hero”.

You can listen to the broadcast on BBC for seven days from today (August 29th) by clicking here or on the photo of Honeyboy. He made some great record and to find out more about his life and music read Tony Russell’s obituary from the Guardian.

This entry was posted in 78rpm, Blues, Roots, Website. Bookmark the permalink.