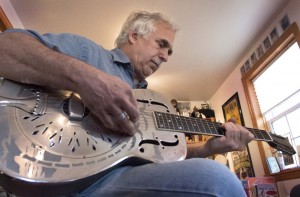 Jerry Zolten strumming some blues riffs on his 1932 National Steel Guitar, the preferred instrument for many of the Paramount recording artists.

People have applied a host of labels toô Jerry Zoltenô over the years. The Penn State Altoona associate professor has been variously described as a musician, record producer, collector, musicologist, author, stand-up comedian, even dog owner. But the description he likes best? Educator.

An educator in the broadest sense – not only a teacher in front of a classroom full of undergraduates, but an educator who touches a global audience with his vast knowledge of American roots music and early recording artists (and his take on the history of stand-up comedy, but that’s another story).

One of Zolten’s latest research projects focuses on the emergence in the early 1920s of the Paramount record label (no association with the Hollywood film studio), which offered a national platform to African American artists, who went on to have important but largely unexplored influences on the mainstream music of subsequent generations.

Associate Professor Jerry Zolten discusses the Reverend T.T. Rose, one of the most influential African American recording artists on the Paramount label.

“While my research begins with discovering things for myself, the exciting part is in the dissemination of what I’ve discovered,” Zolten explains. “It’s about sharing knowledge and helping people better understand and appreciate not only music, but how it connects to and what it says about, a particular culture in time and place.”

That’s the essence of his Paramount research. His previous writings have earned him widespread acclaim as a leading scholar of long-forgotten, neglected, or underappreciated roots music artists who in the past century helped form the bedrock of American pop music: Amos ‘Bumble Bee Slim’ Easton, Rev. J.M. Gates, Sister Rosetta Tharpe, the Fairfield Four, the Dixie Hummingbirds and more.

Those artists – virtually unknown to most modern fans – paved the way for such latter-day performers as James Brown, Aretha Franklin, B.B. King, Little Anthony and the Imperials, Paul Simon, Michael Jackson, Russell Simmons and numerous other stylists in genres ranging from blues to soul to rock ‘n’ roll, doo wop and hip-hop.

Zolten got involved with the Paramount project by way of Alex Van der Tuuk, considered by musicologists to be the leading historical authority on the label. Van der Tuuk was heading a massive undertaking to document Paramount’s evolution and make its recordings more accessible to the public. Hundreds of artists recorded for the label between 1917 and 1932, and Van der Tuuk recruited Zolten and several other specialists to find out more about them. Zolten’s task was to dig into the life and times of about 30 artists, primarily gospel singers and vocal groups.

The Paramount label was owned by the Wisconsin Chair Co., a furniture manufacturer. The company entered the record business just when technology was enabling production and distribution of records to mass audiences. The chair company reasoned that families would need to buy ‘Victrolas’ to play the records, and those machines were typically sold in furniture stores – where record fanciers might also find other home furnishings to their liking.

Wisconsin Chair saw commercial possibilities in marketing recording artists to a growing African American community, and decided to go in that direction with its Paramount label, bringing into furniture stores potential customers who otherwise might not be shoppers.

“In the decades leading up to the 1920s, musical performance was primarily live, self-made or up on stage,” Zolten says. “You had to be there to experience the music. Then suddenly there was this new technology – sound recordings – and an artist who recorded could reach listeners country-wide.”

Zolten offers the Rev. T. T. Rose as an example. As a live performer, he was known only to a small circle of admirers in the Chicago area, but he had two recording sessions with Paramount in the late 1920s. Rose was likely the first to record ‘If I had My Way’ the story of Samson and Delilah, a well-known song since recorded by many other artists, including the Grateful Dead. He is perhaps best known today for his original song, ‘Goodbye Babylon’ which was the title track of a Grammy-nominated CD compilation from a few years back, the song reimagined and released under the same title by the Black Keys.

“I wanted to know, how did Rose, and others, get from being a live performer, with a local following, to becoming a recording artist,” Zolten says. “I’ve found that most of these artists didn’t set out to become commercial entertainers. They simply felt compelled to make music. And when you look at individuals like Rose at the micro level and then take these discoveries as a whole, you can see the broader implications for our society.”

“I’m fascinated as I learn more about how ‘show business’ worked for black entertainers, and how many of them had no choice but to become entrepreneurs in addition to being musical artists,” he says. “They achieved — in this case thanks to the Paramount label — a degree of material success and prestige, even though most were barely paid for their recordings, usually just a modest one-time flat fee and maybe some records they could sell at gigs. That contrasts with how African Americans were portrayed, say, in films during that era, in roles that were demeaning.”

“Rev. Rose saw his role as a recording artist as providing inspiration, uplift, hope, during tough times, addressing racism indirectly, as in the line ‘I’m gonna tear this building down’ in the Samson and Delilah song,” Zolten says. “Or writing lyrics that pointed the way to a morally upstanding life, so that the individual did not succumb to the indignity and diminishment of racial stereotypes.”

Zolten cast his research net broadly by first searching through old newspapers. “So many newspapers are now accessible online, even small ones with niche readerships. A search like this would have been impractical a generation earlier. I also spent some time in Atlanta, going through microfilm at the Auburn Avenue Research Library on African American Culture. It’s a fabulous resource.”

He also worked with non-academic researchers and collectors, many of whom have devoted a lifetime to gathering and preserving information about obscure recording artists. Some collectors, such as Pete Whelan, a Penn State alumnus and publisher of the magazineô 78s Quarterly, had extremely rare phonographic recordings they were willing to share. Those original disks can fetch multiple thousands of dollars among today’s music and recording buffs. Zolten himself confesses to being “a fanatical collector of blues, jazz and gospel,” in part the result of the cultural influences he was exposed to while growing up in McKeesport, just outside of Pittsburgh.

Eventually he was able to uncover tidbits of information that in one stunning case led him to the descendants of T. T. Rose. He located the Rev. Rose’s 95-year-old daughter, who had “no idea of the recent celebrity or even interest in her father’s music and 1920s recordings,” evidence of how deeply buried was that part of his past.

Overall, Zolten says he made many important and exciting discoveries of Paramount artists whose lives, if not their music, time has passed by.

“I think it’s a labor of love for Jack White,” Zolten says, “and really for all of us who became involved.”

The result of the Paramount researchers’ labors was unveiled on October 29th in Nashville with Volume I ofô “The Rise and Fall of Paramount Records,”ô a collection of rare sides issued on the Paramount label, containing 800 newly remastered tracks representing 172 artists, released through a collaboration between White’s Nashville-based Third Man Records and Austin, Texas-based Revenant Records. The collection also features such items as a “field guide” to Paramount’s artists and reproductions of the label’s promotional materials.

“Back in 1938, the legendary impresario John Hammond sought to elevate the stature of African American blues, jazz and gospel artists by presenting them at Carnegie Hall,” Zolten observes. “‘The Rise and Fall of Paramount Records’ with its luxurious packaging in essence does the same thing.”

Jerry Zolten, Ph.D., associate professor of communications at Penn State Altoona, can be reached atô jjz1@psu.edu.
This entry was posted in Uncategorized. Bookmark the permalink.