Washington DC bluesman Bobby Parker, who died on November 1st aged 76, will forever be associated with The Beatles and Led Zeppelin. Why? Well both bands adapted the guitar intro to his biggest number, ‘Watch Your Step’ cut for V Tone Records in 1961 into their own repertoire.

The Fab Four adpated the intro on two hit sides, ‘I Feel Fine’ and ‘Day Tripper’ and Jimmy Page adapted Parker’s guitar intro as the lead in to the John Bonham showcase ‘Moby Dick’. Not to be outdoneÂ Robert Plant cites Parker’s first big record – cut for Vee Jay in 1958 – ‘Blues Get Off My Shoulder’ as the disc that inspired him to start singing. Carlos Santana was also inspired by Parker’s stage show and guitar playing.

Born in Lafayette, Louisiana in 1937, Parker grew up in California and was influenced by Johnny Otis and R&B duet Don & Dewey. He evetually joined R&B band leader Paul Williams’ Band playing at the Apollo Theatre as the house band. He recorded with Williams’ band in 1956 and later played in bands lead by Bo Diddley and Fats Domino.

He eventually settled in Washinton DC playing blues clubs and touring on the back of his two hits and waxing for small independent labels. 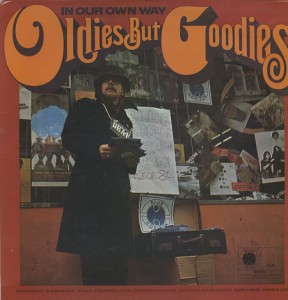 Click on the album cover to hear Bobby’s Blue Horizon recording of ‘It’s Hard But It’s Fair’ from 1968.

In the 1968 he visited the UK for a short tour and cut two sides for Mike Vernon’s Blue Horizon label with UK session musicians.

‘Its Hard But Its Fair’ / ‘I Couldn’t Quit My Baby’ – both became well known to UK blues fans through its inclusion on the classic Blue Horizon sampler ‘In Our Own Way – Oldies But Goodies’ issued in 1969.

Mike Vernon recalled that Parker proved difficult to work with, and the label didn’t renew a recording deal. He basically dropped out of site, until in the early 1990s He recorded albums for Blacktop Records – ‘Bent Out Of Shape’Â (1993) and ‘Shine Me Up’Â (1995)Â and also toured Europe on the back of the albums.