John Mayall : On Tour With A New Album Due In May 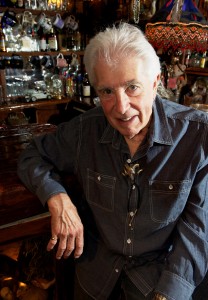 The â€˜Godfather of British Bluesâ€™ John Mayall is eighty years young this year and to celebrate he has signed a new record deal with Forty Below Records who have just announced the release of a new album for May this year. It will be Mayallâ€™s first studio album in five years. Titled â€˜A Special Lifeâ€™, the new album was recorded in November, last year at Entourage Studios in North Hollywood and was produced by Mayall. The new set also boasts original cover art and design created by Mayall.

Â Mayall who has a reputation for changing his bands like most people change shirts is joined by a stripped down combo of Texas guitarist Rocky Athas and a Chicago-based rhythm section of Greg Rzab on bass and Jay Davenport on drums. This lineup came together five years ago for his last studio album, â€˜Toughâ€™.

Â John Mayallâ€™s place in music history is assured. He put together the first of his classic Bluesbreakers band in the early 1960s. The Bluesbreakers backed blues artists touring the UK at the time including John Lee Hooker, T-Bone Walker and Sonny Boy Williamson.

When Eric Clapton quit The Yardbirds, he joined The Bluesbreakers and recorded the classic album, â€˜John Mayall’s Bluesbreakers featuring Eric Claptonâ€™ (known as â€˜The Beanoâ€™ album) in 1966. When Clapton left Mayall attracted a succession of future UK blues and rock stars including Peter Green, John McVie, Mick Fleetwood, Andy Fraser, Mick Taylor, Jon Hinesman, Keef Hartley, Aynsley Dunbar, Dick Heckstall Smith and countless others. His classic albums from the 1960s and 1970s include â€˜A Hard Roadâ€™, â€˜Bare Wiresâ€™, â€˜Blues From Laurel Canyonâ€™ and two volumes of live shows in 1968 called â€˜Diary Of A Bandâ€™. In 1969 Mayall caused a stir in the music world with the release of a drummer-less â€˜acoustic liveâ€™ album â€˜The Turning Pointâ€™ cut at the Filmore East in New York.

In 1982, he re-formed the Bluesbreakers with drummer Colin Allen who joined with John McVie and Mick Taylor for a couple of tours and a video concert film entitled â€˜Blues Aliveâ€™ featuring Albert King, Buddy Guy, Junior Wells and Etta James. In 1984, he created a new Bluesbreakers including stellar guitarists Coco Montoya and Walter Trout.

Throughout the 1980s and 1990 John’s popularity went from strength to strength with a succession of albums including â€˜Wake Up Callâ€™ featuring Buddy Guy, Albert Collins, singer Mavis Staples, and Mick Taylor.

In 1993, Texas guitarist Buddy Whittington joined the Bluesbreakers making his recording debut on Mayall’s â€˜Spinning Coinâ€™ album and on â€˜Padlock On The Bluesâ€™ Mayall was joined by a rejunivated John Lee Hooker.

He continued to team up with former bandmates as well as being joined on album and at live gigs by ZZ Top’s Billy Gibbons, Steve Miller, organist Billy Preston, Steve Cropper of the MGs, Otis Rush, Gary Moore and Â Jeff Healey.

Â At a 70th Birthday celebration in aid of UNICEF in Liverpool, a concert was filmed, recorded and released as a DVD and double CD in December 2003 featuring the Bluesbreakers and Eric Clapton, Mick Taylor and Chris Barber. John Mayall’s 56th album release, â€˜In The Palace Of The Kingâ€™, was an entire paying tribute to Mayall’s long-time hero bluesman Freddie King.

For the last ten years, Mayall has additionally released recordings on his own online label including rare live recordings from the late 1950s and early 1960s and historic live shows and solo performances.

Â This spring and summer, whilst many eighty year olds will be pottering in the garden and putting their feet up, John Mayall will be on the road touring Europe and the US with his band.

As part of the tour he is playing two shows at Londonâ€™s Ronnie Scottâ€™s Club in April. If you want to go to see a living legend celebrate his 80th year – its too late, the London shows sold out in days!

This entry was posted in Blues, Compact Disc, DVD, Roots. Bookmark the permalink.