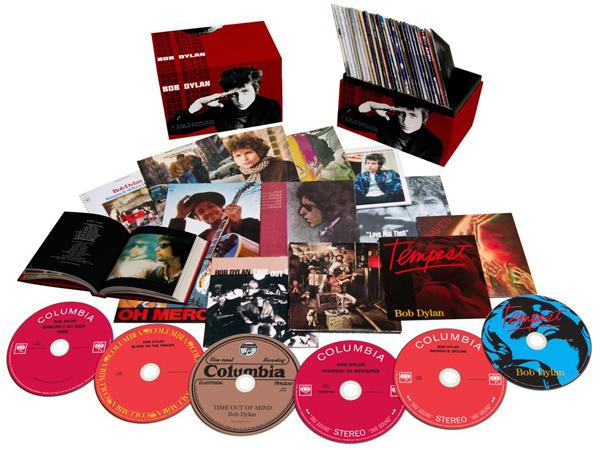 ‘The Complete Bob Dylan Album Collection, Volume One’ will be a deluxe box set featuring all of Dylanâ€™s original studio and live albums 42 albums in all.

Fourteen albums of these have been newly remastered Â and each is housed in mini-jacket packaging, perfectly replicating each original release.

Also included in ‘The Complete Album Collection, Volume One’ is ‘Side Tracks’ a new two CD set of songs from non-album singles, compilations and more.

The box will be released released on November 4th by Columbia Records and includes 35 of studio albums, from his 1962 self-titled debut to his 2012 album ‘Tempest’.

The collection will feature six live recordings, including the 1972 live album ‘Before The Flood’ and his 1995 ‘MTV Unplugged’ show, and a new book featuring extensive new album-by-album liner notes penned by Clinton Heylin with an introduction written by Bill Flanagan.

The box set, which will also see the singer’s 1973 record ‘Dylan’ given its first North American release.

In addition to being made available as a CD boxset, it will also be available digitally as a harmonica-shaped USB stick.

Columbia Records will also release another compilation titled ‘The Very Best Of Bob Dylan’ on November 4th, which will come in both a standard single-disc version and a deluxe double DC format. ‘The Bob Dylan Complete Collection Volume Two’ will be released next year. The next instalment in the series will compile the entirety of the singer’s popular Bootleg series for the first time.

The details for ‘Bob Dylan Complete Collection: Volume One’ are as follows:

Side Tracks
‘Baby, I’m In The Mood For You
‘Mixed-Up Confusion’
‘Tomorrow Is a Long Time’ (live)
‘Lay Down Your Weary Tune’
‘Percy’s Song’
‘I’ll Keep It with Mine’
‘Can You Please Crawl Out Your Window?’
‘Positively 4th Street’
‘Jet Pilot’
‘I Wanna Be Your Lover’
‘I Don’t Believe You (She Acts Like We Never Have Met)’ (live)
‘Visions of Johanna’ (live)
‘Quinn The Eskimo
‘Watching The River Flow’
‘When I Paint My Masterpiece’
‘Down In The Flood’
‘I Shall Be Released’
‘You Ain’t Goin’ Nowhere’
‘George Jackson’ (acoustic version)
‘Forever Young’
‘You’re A Big Girl Now’
‘Up to Me’
‘Abandoned Love’
‘Isis’ (live)
‘Romance in Durango’ (live)
‘Caribbean Wind’
‘Heart of Mine’ (live)
‘Series of Dreams’
‘Dignity’
‘Things Have Changed’