It was way back in July 1970 when I first heard Son House. John Peel’s Saturday afternoon show āTop Gearā had recorded Son in London for broadcast the following week.Ā

I have to admit – I hadn’t heard anything like it as Sonās bottleneck guitar and almost indecipherable lyrics came booming out of a my transistor radio.

I had been collecting blues records, albums, EPās and singles by Hooker, Muddy, Wolf, Little Walter, and various compilations and listened each week to Mike Raven on the BBC, learning that there we two Sonny Boy Williamson’s and that Robert Johnson was the ‘King Of The Delta Blues’ after hearing Mike play ‘Hellhound On My Trail’.

But all this had not prepared me for Son House – this was raw, rough as a bears arse music, primeval blues. So this is where Captain Beefheart got ‘Ah Feel Like Ahcid’ from!

Eddie James ‘Son’ HouseĀ was born in Riverton, near Clarksdale, Mississippi in 1902. Although he wanted to be a Baptist preacher, the devils music called and he spent time in the Parchman Farm prison for killing a man in self-defence. On release – after two years – he met fellow blues singers Charlie Patton. Robert Johnson and Willie Brown.

In 1930, Art Laibly ofĀ Paramount RecordsĀ arranged to record Charlie Patton.Ā House, Brown, and pianist Louise Johnson, came along for the ride to Grafton, Wisconsin with Patton and they too recorded for Paramount. They were great records but failed to sell.

House cut ten songs – eight of which were released. He continued to play with Patton and Brown while working as a tractor driver on plantations in the Lake Comororant area.

Ā In 1941 folkloristĀ Alan LomaxĀ recorded House for theĀ Library of Congress.Ā Willie Brown, Fiddlin’ Joe Martin and Leroy Williams supportedĀ him on these recordings. Lomax returned in 1942 and recorded House again. These sides included the superb āWalking Bluesā and song that he had originally recorded for Paramount in 1930 which went unissued. Robert Johnson recorded the song in 1936 for Vocalion. The song has been covered by many rock-blues artists including Eric Clapton, Rory Gallagher, John Kay of Steppenwolf, the Quicksilver Messenger Service and the Grateful Dead.

Then House disappeared – moving to Rochester, New York, where he worked as a railroad porter.

In 1964 blues record collectors Phil Spiro, Dick Waterman and Nick Pearls (founder of Yazoo Records) foundĀ House who had not played music for many years.

In order to help House rediscover his bottleneck guitar technique Al Wilson (later of Canned Heat – see comment) was drafted in to help.

A recording deal with CBS was secured and Son played at the Newport Folk Festival in 1964, became one of the great rediscovered blues artists – alongside Skip James, Bukka White and Mississippi John Hurt and toured Europe with the AFBF tour in 1967.

The CBS album ‘The Father of Delta Blues’ was cut in 1965 and Son recorded with Al Wilson in London in 1970Ā the album ‘John the Revelator: The 1970 London Sessions’ – the same period when he broadcast on the BBC. 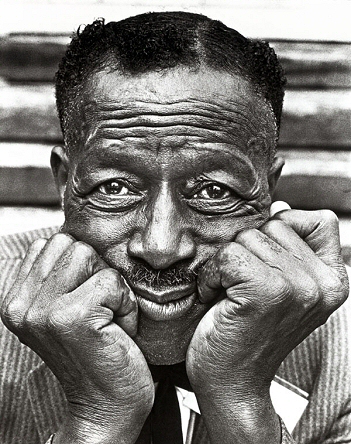 He continued to tour the USA and Europe but was plagued by bad health and alcoholism and he returned to live in Detroit where he died in 1988.

House’s early recordings are pre war blues masterpieces have been available on vinyl and CD many times and live recordings still get discovered and reissued – including a recent set recorded in Seattle in 1968 and recently reissued by Bob West at Arcola Records.

Son’s recordings for the Library of Congress recordings from 1941 and 1942 have now been reissued by as ‘Raw Delta Blues’ along with live recordings by Not Now Music, a budget outfit retailing double and three CD sets at amazing prices. The two CD is retailing at under Ā£4 and they have also issued a vinyl version selling at around Ā£15.

The CD set is the ideal place to get your hands on some of the toughest delta blues ever put onto shellac!

This entry was posted in Blues, Compact Disc, Vinyl. Bookmark the permalink.

2 Responses to Son House recordings reissued on vinyl and CD