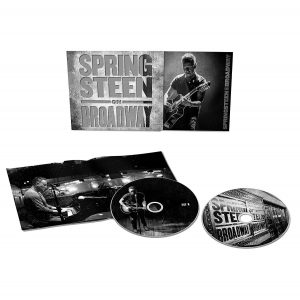 ItŌĆÖs 45 years since of SpringsteenŌĆÖs debut album ŌĆśGreetings From Asbury Park, N.J.ŌĆÖ released in 1973. The album sold poorly, but it started of a career spanning years of sell out three-hour stadium gigs and world tours.

Now 69, he undertook a one man residency at the 975 seat Walter Kerr Theatre, on Broadway, playing 236 shows, five nights a week from October 2017 to late November 2017 with additional dates booked through the end of June 2018 and another run between March and December 2018.

He played guitar, harmonica and piano, performing songs for his extensive catalogue interspersing them with reminiscences from his childhood and career. They are humorous, poignant and capture important times in his personal life and musical career. His wife Patti Scalia appeared at most shows duetting with her husband on ŌĆśTougher Than The RestŌĆÖ and ŌĆśBrilliant DisguiseŌĆÖ.

That was it until a seismic shock hit the collective nervous system of the USA when Elvis appeared on the Ed Sullivan Show in 1956. Springsteen says that if they knew what would going to happen ŌĆ£they would have shut that shit downŌĆØ. It also encouraged the seven years old Bruce to take up ŌĆśthat thing below the waistŌĆÖ ŌĆō a guitar.

He says that he never worked in a factory, or worked hard labour and never worked five days a week – ŌĆ£until nowŌĆØ. He had never ŌĆśraced in the streetsŌĆÖ, or done the things he sang about ŌĆō but he says he did have good, tight band.

His recollection of being sent to a local bar to fetch his dad home is a wonderfully told story. He talks about his pride in his mother, who loved dancing to 1940s swing bands and who held down a good job at an insurance company.

The intros and monologues are filled with stories of small town USA. ŌĆśMy HometownŌĆÖ recalls a time before the good industrial jobs left the USA and the racial tensions in school. On the intro to ŌĆśThe Promised LandŌĆÖ Springsteen says: ŌĆ£Jersey was in the boon docksŌĆØ. A place where nobody came and nobody left and runs through the dead end gigs he played in N.J. – drive in movies, weddings, supermarket openings, church halls, before moving to the west coast to try to make it big.

Although the set list and scripted monologues changed little you can feel the sheer emotion on ŌĆśTenth Avenue Freeze-OutŌĆÖ when he is speaking about his friendship with the late E Street Band sax player Clarence Clemons.

The CD contains ŌĆśLong Time CominŌĆÖŌĆÖ (on which explains his complex relationship with his father) and ŌĆśThe Ghost Of Tom JoadŌĆÖ, both substituted for the duet he performed with Patti when his she took ill.

ŌĆśBorn In The USAŌĆÖ is a eulogy for friends killed in action in Vietnam, delivered with anger and bitterness.

ŌĆśTom JoadŌĆÖ has a damning spoken intro on those ŌĆ£in the highest offices of our land who want to speak to our darkest angels, who want to want to call up the ugliest and the most divisive ghosts of AmericaŌĆÖs past, who want to destroy the idea of America for all. ThatŌĆÖs their intention.ŌĆØ

ŌĆśThe RisingŌĆÖ, the anthem written for New York fire fighters after ŌĆś9/11ŌĆÖ is taken at a reflective pace, but ŌĆśDancing In The DarkŌĆÖ brings back the good times (even done solo) and is met with a thunderous applause.

Springsteen says his is ŌĆ£an American story ŌĆō a long and noisy prayer and hopes he has been a good travelling companionŌĆØ He has. There are not many performers who could pull off a stunning show like this – but as a review of a show many years ago in an English music paper once said ŌĆ£Springsteen delivers.ŌĆØ

ŌĆśSpringsteen On BroadwayŌĆÖ is the soundtrack to the Netflix film of the same name issued by Columbia as a 2 CD set, or on vinyl as a 4 LP set.