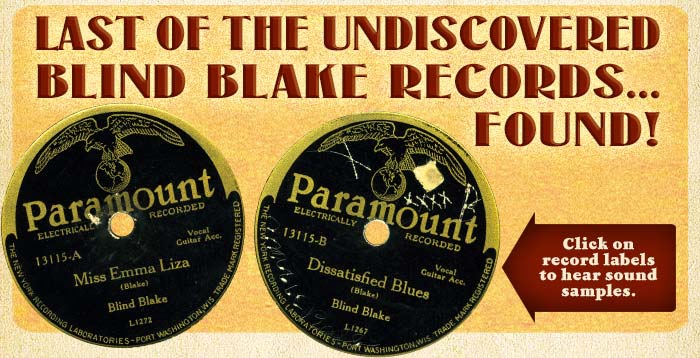 Old Hat Records have announced the discovery of Paramount 13115, Â one of the 42 Blind Blake records issued by Paramount between 1926 and 1932 –Â only this disc remained unknown to collectors until now.

The record was found at a flea market in Virginia in August this year by a collector who wishes to remain anonymous.

Click on the graphic above to hear Blind Blake performing ‘Miss Emma Liza’ and ‘Dissatisfied Blues’, the songs that round out his complete recorded works.

In August of 2007, Old Hat Records turned up a copy of Paramount 13123 by Blind Blake,
also previously unknown to collectors.Â CLICK HEREÂ for Â the story of that discovery.

This entry was posted in 78rpm, Blues, Rare Records, Roots. Bookmark the permalink.